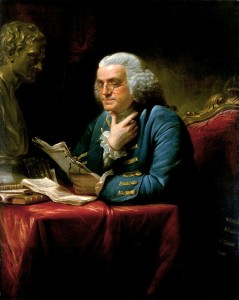 Benjamin Franklin is best known as one of our nation’s Founding Fathers. He helped to draft the Declaration of Independence and the U.S. Constitution. In addition, to being a statesman and diplomat, Franklin was also an author, publisher, scientist and inventor.

Franklin was naturally curious about things and how they worked, so it’s no surprise that he would want to find ways to make things work better. One of his early inventions, the Franklin stove, was invented to help colonists heat their homes more efficiently and safely.

In colonial America, homes were heated by fireplaces, which unfortunately, were very inefficient. They produced a lot of smoke and most of the heat went up the chimney.

In an effort to solve the problem of heat escaping up the chimney, Franklin developed a freestanding cast-iron fireplace, called the Pennsylvania Fireplace, in 1741. The Pennsylvania Fireplace could stand in the middle of the hearth and radiate heat in all directions. It had a hood-like enclosure that was open to the front. In the rear, there was an air box or hollow baffle that transferred heat to the room’s air. Vents near the top expelled heat into the room. The fireplace also featured a U-shaped flue called an inverted siphon that drew the fire’s hot fumes around the air box. The flue would carry the smoke and ash first downward through the floor and then up the chimney. But in order for the smoke to flow properly, the fire needed to burn constantly to produce a proper draft.

Unfortunately, Franklin’s pamphlet for the fireplace didn’t explain about the need to keep the siphon warm, so it would work properly. Therefore, his fireplaces often produced a poor draft since the smoke cooled too much passing through the siphon. Consequently, Franklin didn’t sell too many of his Pennsylvania Fireplaces.

Since Franklin didn’t patent his fireplace design, other people developed improvements to the fireplace/stove. In 1780, David Rittenhouse modified Franklin’s design by angling the sides of the stove to radiate more heat into the room. Also Rittenhouse changed the U-shaped flue system to an L-shaped system to allow for better smoke ventilation. While he called his invention the Rittenhouse stove, it become better known as the Franklin stove.

While today’s modern homes don’t use Franklin stoves any longer, many homeowners still use wood-burning stoves to heat their homes. To make sure your wood-burning stove is operating properly, you should have it inspected and cleaned annually by a professional chimney sweep, like T.J.’s Chimney Service. Contact T.J.’s Chimney Service to schedule your stove inspection and cleaning today.