Founded by Tim J. Robinson (aka T.J.) in 1979, our family owned and operated business has repaired, replaced and restored chimneys for thousands of families in Indianapolis, Shelbyville, Greenfield, Carmel, and surrounding areas.

Our goal is for every homeowner to view their fireplace as a space where families can gather, make memories and enjoy their time together.

We believe that homeowners shouldn’t have to worry about the damage and dangers that could occur because of chimney leaks, obstructions or structural breakdowns. We inspect and repair those hard-to-see areas, alleviating the homeowners’ stress and concern. 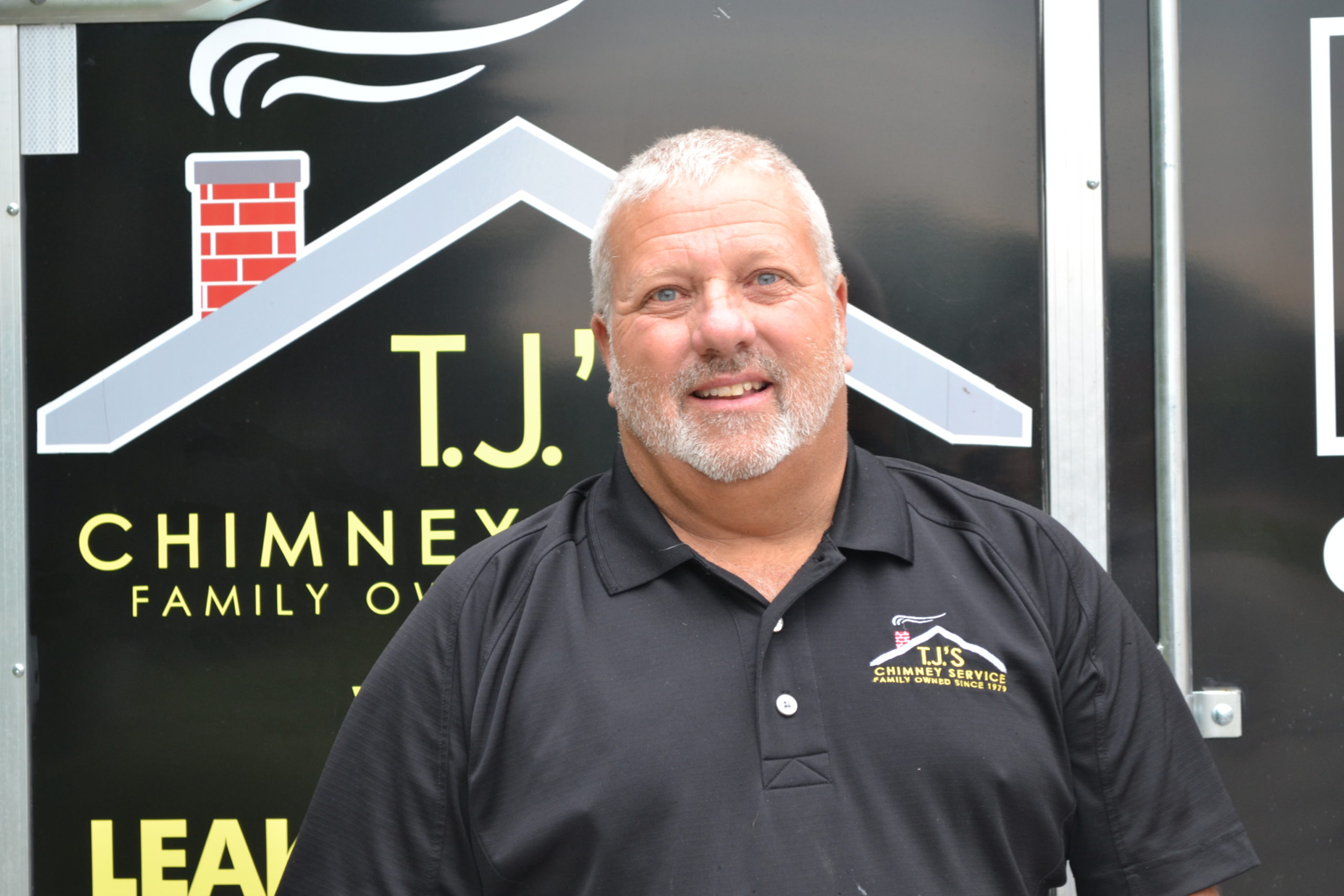 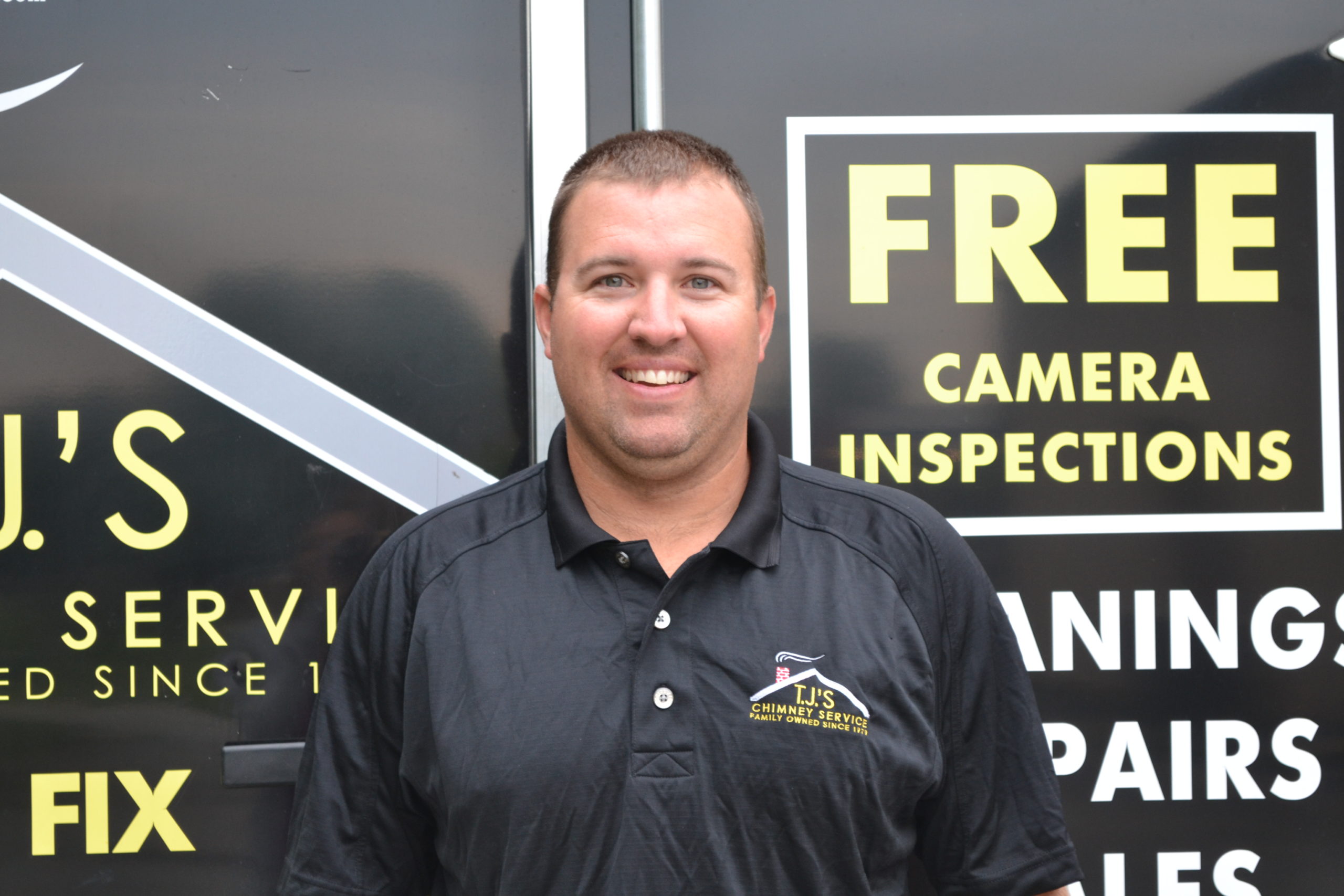 T.J.’s venture into entrepreneurship started as a weekend side-hustle to supplement his factory job.

Armed with a powerful soot sweeper, brushes, and a study manual, he learned everything he could about chimneys, chimney sweeps, masonry, and fireplaces. He visited an Indian Reservation in South Dakota in 1986 to learn the basics of chimney repairs. In the same year, he joined the National Chimney Sweep Guild (NCSG) and earned his certification.

Upon learning that most bricklayers were not interested in small chimney jobs, T.J. found himself a niche market in residential chimney repair, adding dryer vent inspection and cleaning to his list of services offered. A quick study with determination and a strong work ethic, it didn’t take long for T.J. to build a loyal client base that valued his workmanship, attention to detail and customer service.

In 1990, he hired his first full time employee and founded the Indiana Chimney Sweep Guild, making longtime friends who share his passion and high standards for the industry.

T.J.’s son, Gabe Robinson, joined the business in 2001 and became co-owner. A journeyman bricklayer, Gabe has followed in T.J.’s footsteps, demonstrating a strong work ethic and commitment to quality with every job.

Our beautiful showroom is located at 1432 E. Main Street, Greenfield, IN and is open by appointment.

In addition to the NCSG, we are members of the Chimney Safety Institute of America, Business Networking International, the Greenfield Area Chamber of Commerce, and the Better Business Bureau

If you ever have issues with your chimney or fireplace, we’re just a phone call away. Homegrown in Indiana and rooted in Midwestern values, T.J.’s Chimney Services proudly takes care of our own.

What Our Customers Are Saying

So very happy with our updated fireplace! Brandon, David, and Austin did an awesome job. Professional, knowledgeable. Very careful in keeping everything neat and clean. I would recommend TJ’s to anyone who asked. Great job! We love our fireplace.

This company went above and beyond to make sure everything was done exactly as I wanted, and done correctly! The installers were professional and friendly, as well as the office workers! I can’t recommend this company highly enough.

Brandon and Jordan did an excellent and professional job of removing our old fireplace and installing the new fireplace. This included masonry and carpentry work. Brandon was very precise with his installation of the cultured stone around the fireplace as well as reinstalling the mantel and trim. We highly recommend them.

Hi! Tim here. I started TJ’s Chimney Sweep back in 1979 (which means we had our 36th birthday this year).  I launched it as a way to earn a second income and to get away from working in a factory. This was right at the time when the old oil embargo was well under way…

Why Does My Chimney Stink?

During the summer, when we have hot, humid weather or lots of rain, you may notice an undesirable smell coming from your fireplace and chimney. This odor can be caused by a variety of reasons. Let’s explore some of the most common types of smells and the likely cause.   An asphalt or bad barbeque…

Clothes Dryer Exhaust Safety – 6 Requirements You May Not Know

Did you know that lint and debris can build up in your clothes dryer duct? When lint buildup occurs, it can create potentially hazardous conditions, like dryer fires that can turn into devastating house fires, and carbon monoxide buildup that can poison people and pets – and even result in death. Therefore, it’s important that…

What Is a Level 3 Chimney Inspection?

If you have experienced a chimney fire or major damage to your chimney due to a lightning strike, a severe storm or an earthquake, you should have your chimney inspected by a professional in order to assess the amount of damage done. In these instances, the Chimney Safety Institute of America (CSIA) recommends that you…

Why You Need to Clean Your Oil-Fired Furnace Chimney

Did you know that oil is the dirtiest burning fuel? If you have an oil-fired furnace, not only should you have your furnace inspected every year, you also need to have the chimney inspected and cleaned annually, because oil’s by-products of combustion can be very volatile and corrosive. And neglecting to clean your oil furnace…

When Should I Have My Air Ducts Cleaned?

Did you know that almost 40 pounds of dust is created in a typical six-room house every year? That’s a lot of dust. And all of that dust affects your home’s indoor air quality. If you or a loved one suffers from respiratory health conditions, autoimmune disorders or some environmental allergies, dust can cause some…

What Is a Level 2 Chimney Inspection?

If you use a chimney to vent a fireplace, wood stove, water heater, furnace or boiler that burns wood or fossil fuels, it’s critical that you perform regular chimney inspections and maintenance for the safe operation of your system. However, the type of chimney inspection you need depends on a number of factors.   Are…

A Lightning Strike Can Damage Your Chimney

It is summertime and you know what that means – it is thunderstorm season again. Every year, we experience about 100,000 thunderstorms in the U.S, according to the National Weather Service (NWS). And about 10% of these storms are severe. While thunderstorms can happen at any hour, they’re more likely during the afternoon and evening…

THE DIFFERENCE YOU CAN FEEL TJs Chimney Service

When it comes to chimney repairs and chimney sweeps, we know you have many choices. But we believe our longevity in the business and reputation for quality sets us apart from our competitors.

As members of the community, we are your friends, neighbors and fellow business owners. For every home we service, we provide the same care and attention to detail we would give our own homes.