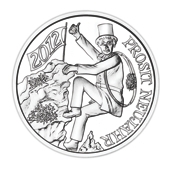 Since the 1930s, Austrians have practiced a tradition of giving each other lucky tokens. Upon receiving the tokens, recipients are supposed to carry them around for the remainder of the year to keep that luck with them at all times. For 2012, the Austrian Mint has issued a lucky coin depicting a chimney sweep scaling the Alps. In the representation, the sweep’s top hat is firmly in place on his head and he has his fist raised in a thumbs-up gesture.  The back of the coin features a phrase that translates roughly to, “Although, I am small and round, I’ll bring you luck all year round.” Coins are available in silver and bronze.

First, thank you to the Austrian numismatists responsible for the coin’s creation! I never thought I’d see a chimney sweep on a modern day collectible. Unfortunately, chimney sweeps don’t receive that kind of buzz here in the United States. But the idea is great. Everyone deserves a little luck. And if you can wrap in the importance of our profession with a coin that people carry around daily, well . . . it would certainly cut down on our advertising bills!

If you’re interested in buying the lucky chimney sweep token, they can be bought online at www.eurocollections.com.  Cost is $19.95 for the silver and $6.95 for the bronze.

What do you think of this amazing coin?